nothing in your basket

Originally a student of philosophy Gerard Mercator (1512-1594) came under the influence of Gemma Frisius, the founder of the Belgian school of Geography, and became interested in mathematics - both in the theory and the practical application. With these skills he soon became an expert in land surveying and cartography, as well as a skilled engraver.

His first maps were published in 1537 (Palestine), and 1538 (a map of the world), although his main occupation at this time was globe-making. He later moved to Duisburg, in Germany, where he produced his outstanding wall maps of Europe and of Britain. In 1569 he published his masterpiece, the twenty-one-sheet map of the world, constructed on what is now known as Mercator’s projection.
It was during this period, while teaching cosmography at Duisburg, that Mercator realised the pressing need for a modern collection of maps to supersede the Ptolemaic atlases. This project was gradually expanded to be a complete description of the Universe, both heaven and earth, with other volumes on the Creation, Genealogy and History and a Chronology.  The description of the earth was to be in two parts, a modern geography and a Ptolemaic atlas, a massive and over-ambitious project. In fact, only the Chronology and the Ptolemaic Geographia were completed in his lifetime, and it was left to his son, Rumold, to complete and publish the world atlas in 1595. Entitled Atlas, sive Cosmographicae Meditationes de Fabrica Mundi, this was the first time the name “Atlas” was applied to a bound collection of maps, and, like Mercator’s projection, has remained in everyday use to this day.
After Rumold’s death in 1599, the plates for the atlas were published by Gerard Jr. Following his death in 1604, the printing stock was bought at auction by Jodocus Hondius, and re-issued well into the seventeenth century.
Europe Maps   Africa Maps   British Isles Maps   English County Maps B-K   Title Pages 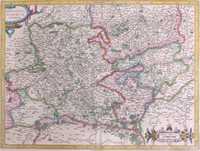 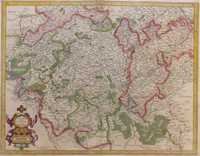 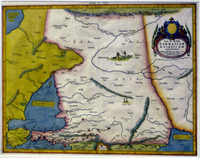 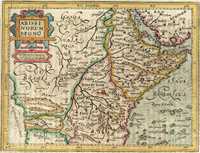 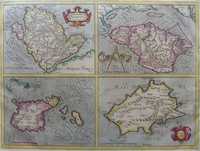 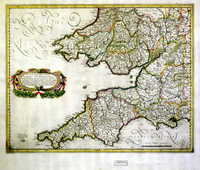